When their planet is invaded, Savora sacrifices her freedom to save her brother, Rolko, from the Chix Cavalry. For fighting back, she’s tattooed as a murderer and sold as a slave on a tropical world, where her master forces her to fight animals and even other people for the amusement of the Chix.

Rolko struggles to survive under occupation, but his empathy gets in into trouble with the local refugees. When Rolko is enslaved, the time comes for Savora and Rolko to escape, but with every planet at war and both sides stretched thin, will Savora have the courage to lead those desperate for a leader to victory? 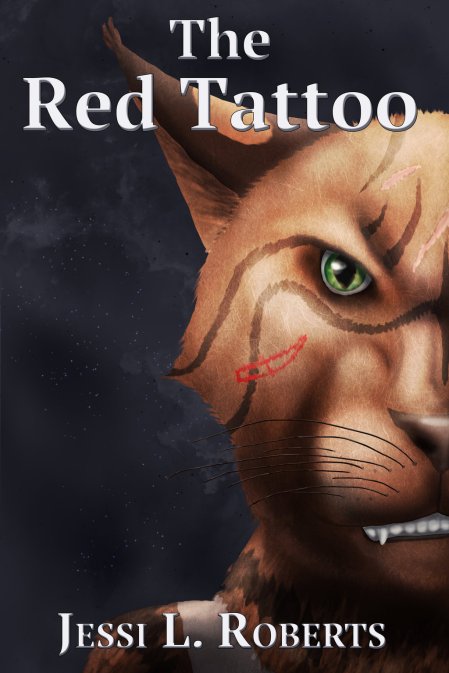 I clawed a large rock from the collapsed mineshaft. It rolled down the pile of rocks and dirt made by the old collapse. More dirt fell from the ceiling and filled the hole left by the rock.

I snarled and dug harder, dull claws scraping against rock and dry soil.

Dirt from the tunnel ceiling ran down my shirt. I ignored it and pushed myself to excavate faster. We needed somewhere safe, and a tent didn’t count as safe, not when the Company could come down on us at any moment.

“Savora, watch it.” My brother, Rolko, held his clawed hands up, trying to keep my spray of rubble from flying into his eyes.

“Sorry.” I stood and glared at the hole in front of me. We had to be almost through the rubble. A little more digging and we’d be into the mine system, long before Mom got back from foraging with the other refugees.

Rolko shook himself, throwing dust everywhere. Sunlight from the mine entrance illuminated the specks. He stood and brushed the yellowish dirt from his face and the ruffs along his jaws, exposing his reddish fur and black stripes. “You should see yourself.”

A quick glance told me he was right. My shirt and short skirt were covered in dust, but I didn’t brush it off. We’d both get dirtier before we finished.

I resumed digging. If only we’d had a shovel, but with the war on, even those had become scarce and expensive, just like everything else. Good thing tunneling was natural for us Elbas. The Torfs never could have dug this out.

Finally, I had a big enough hole to crawl through.

With only a tiny bit of light shining through the hole I’d made, I had to rely on senses other than my vision. I clicked a few times and perked my ears. My echolocation gave me a decent idea of the shaft. The echoes came back, showing me the texture of the walls and the bits of rubble that had fallen from the ceiling. The images I got had no color, but I knew where everything was well enough to navigate. Past the one collapse, the old mine tunnels seemed clear.

Rolko climbed through, his fur scraping against the rock. “We’re going to live here?” I heard his triangular ears twitching, taking in the high-pitched echoes that bounced off the walls.

“Just until the war’s over.” If only Rolko was still young enough to think we’d win the war, but at fourteen, he had to know we’d been losing ever since the space cruiser, Lusta, got attacked and the Chix threw their full support behind the Company.

Rolko touched the dry mine walls. His long ears and whiskers drooped.

Cold air blew through my whiskers, probably from an opening somewhere else in the mine. If we wanted to live here, we’d have to find somewhere with fewer drafts. That meant more digging.

I ran my claws along one of the walls as I walked deeper into the mine. Bits of dry earth flaked off, but my claws hit rock. It would be too hard-packed to dig an entire den by hand. “We’re going to need a shovel,” I growled.

“We don’t have enough coin for food,” Rolko said.

I snarled and slashed at the wall, my claws digging deep.

Rolko stepped away from me. “Easy with the temper.”

The walls weren’t what I wanted to slice to pieces. That rage needed to be aimed at the Company. “Couldn’t they have been happy with two planets? It’s not like we’re a threat.”

“Some people just like to dominate.” Rolko touched the wall. “We can’t change that.”

My ears flipped backward in anger, I stormed back to the hole I’d dug and enlarged it enough we wouldn’t have to squeeze through. Rage at the Company gave me the energy I needed to complete the work. My stomach grumbled. “We got the mine opened. Let’s see if Mom’s back.” Please let her have food, I prayed.

We crawled up through our hole and walked out of the mineshaft. Rolko’s pupils contracted to slits in the light, exposing his eyes, a blue green color more vibrant than the cold blue sky. Around us, bare, rocky mountains jutted from yellowish dirt. In a valley below, ramshackle buildings and tents huddled in a tight group, as if their proximity would be able to break some of the bitter Lokostwan winds. Torf refugees strutted through the tents, their long tails swishing back and forth. Even this far north, none of them wore clothes, not that they needed them with theropodian anatomy and feathery bodies. A few wore belts and slings to support rifles while others had packs.

I headed down the hill toward the village. Rolko followed, swatting at his fur and raising clouds of dust. Without a shirt, he was able to shake most of the dirt loose, while I still had quite a bit that had gotten under my clothes.

A few Torf guards with rifles stood around the edges of the village, their eyes on the horizon and the sky. When they stood still, their bodies were closer to vertical, much like the way we stood. I doubted these guards would be much help. If the Company attacked, we refugees wouldn’t stand a chance, guards or no guards. The only way to survive the Company was to be underground.

As usual, the guards watched us. Even though I hadn’t reached my full height, I stood a head taller than almost all the females and many of the males.

“Your mother’s still out foraging,” one of the old guards said when we came within earshot. The grayish scales on her face were rough, betraying age, and her skin hung loosely. She hadn’t been getting enough food. No one had.

I bowed my head to her, a Lokostwan custom. I couldn’t keep the names of hundreds of Torfs straight, but every one of them knew who we were. In a village of Torfs, three red Elba refugees stuck out.

The elder wasn’t the only one on the edge of starvation. If Mom didn’t find some food soon, we’d start weakening. “Do you know of any jobs around here?” I glanced at Rolko. “My brother and I might be young, but we’re good diggers. We’d work for food.”

The old Torf sighed. “I’m sorry, girl. There’s no work here unless you can find some bendsteel in that mine.” She shivered and fluffed her feathers. The other guards weren’t in much better shape. They were all old. Almost everyone fit for fighting had been drafted with Dad.

If there was steel in that mine, this town wouldn’t have been left vacant until we fled here.

A downy Torf who couldn’t have been older than seven ran to me and stretched out his clawed fingers, silently begging for food.

“Sorry, I don’t have anything.” I looked away, but not in time to miss the kid’s frown deepen in disappointment. The kids had to be getting pretty hungry if they’d risk begging from someone who stood at least a head taller than their parents.

At the edge of the village, a half dozen Torf children, some no older than five and others near Rolko’s age, hopped around a pile of rocks that had once been a building. All of them carried short spears that were little more than sticks with sharpened tips.

“Bet they’ve got a hornsnake,” Rolko said. He took off toward the rock pile. “Come on. We can help get it!”

My mouth watering, I ran after him. A feathery hornsnake was the best we could hope for at an elevation too cold and barren to support many things bigger than insects.

Rolko ran through the kids and knelt on the pile of rocks, his huge ears twitching. I watched from the bottom of the pile. A second Elba would only get in the way of the quick-moving Torfs.

The kids focused on my brother, their heads cocked like they hoped to hear the hornsnake.

Rolko pounced and rolled a large rock to the side. The Torfs came in behind him, their spears lifted. Rolko kept rolling rocks. The kids wouldn’t be able to hear the hornsnake, not like Rolko could.

Rolko rolled away a small boulder.

A hornsnake that had to be at least as long as I was tall zipped from under the rock, its little legs skittering as it slithered. One of the boys stabbed at it with a spear. The snake lost a few feathers but kept going.

An older Torf child lashed out, striking the snake with her three-toed foot. The snake went flying, hit the ground, and bounced. It tried to crawl again, though the Torf’s long inner claw had injured it. A third child leaped off the rock pile and speared the snake through the neck.

The children cheered, happy to have found food at last. Not only was the snake long, but it still had some meat on it. The winter had been kinder to it than it had been to us.

Rolko approached the snake as the teen pulled his spear from the snake’s neck. He looked at the Torfs around him, three of which had the exact same shade of tan feathers as he had, most likely his siblings. He turned on Rolko and the Torf girl who had kicked the snake. “There’s not enough for all of us,” he hissed. “My family gets it.”

A growl escaped my chest, deep and threatening. “Everyone worked to get that snake. Back off.”

He raised the spear and pointed it at my chest, which was nearly level with his head. His three siblings, all younger than he was, lifted their own spears, though their nervous gazes focused on him for leadership.

The girl who had kicked the snake lifted her own spear. Her ash-colored hackles shot up. A younger boy cowered behind her, but at his age, he’d only be a hindrance in a fight.

My hands at the ready, I charged the leader. He sprang back, but not fast enough. I jerked the spear from his grasp, snapped it over my knee, and threw the two halves at his feet. He backed away, his eyes wide and feathers flattened. He knew he didn’t stand a chance against me.

The youngest of his siblings started crying, her skinny frame shaking with every sob.

“We’ll still give you half the snake,” Rolko said. It was more than what I’d have offered, but the kids were just desperate.

The Torf boy dipped his head to Rolko. “Thank you.”

We quickly plucked the snake and cut it into sections, though I kept an eye on the siblings, but the boy had learned his lesson.

I looked at the bit of snake meat we’d gotten. If we mixed it with native roots, we might have enough for a meal.